World War Z: Humanity is on the verge of extinction. From New York to Moscow, via Jerusalem, Tokyo and Marseille, the zombie apocalypse continues to spread.
As the end of the world seems inevitable,

join forces with up to 4 players to survive the gigantic zombie hordes in a thrilling co-op shooter. Based on the Paramount Picture blockbuster film, World War Z features the stories of never-before-seen characters embedded in breathtaking action scenes. 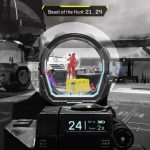